One of LA’s most in-demand studio designers Chris Owens uses FuzzMeasure to test the acoustics in studios ranging from Diplo’s Tron-inspired room to VICE Media’s multi-room production complex. We caught up with him at NAMM 2015 to chat about FuzzMeasure and how he got into the studio design business.

At what stage do you open FuzzMeasure in a studio design consultation?

It depends on the project. In some instances I’m designing places from the ground up, in which case I have a lot more control over variables and can make things somewhat predictable. In other instances when I’m dealing with the confines of an existing space, the first thing I would do is run a test. You don’t always have to, because sometimes the acoustic issues with an existing space can be evident without testing. However the benefit of testing is not always just diagnosing the problem but also explaining to a client why certain measures need to be taken. 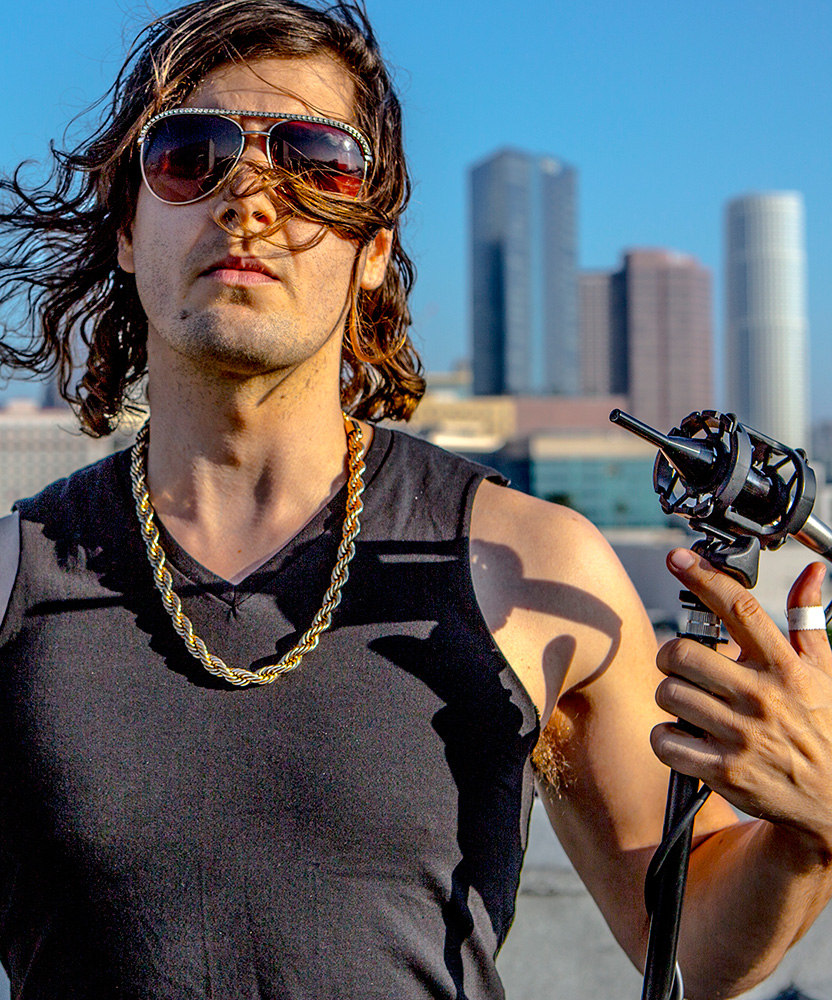 When a client isn’t in a space working already it's not uncommon for them to question the need for or cost of acoustic treatment. Granted, with trial and error anyone can make great records anywhere—people have made great mixes in untreated bedrooms and basements. But in any sort of professional working environment where time is a factor—especially in commercial facilities where you have different engineers, producers and clients coming in and out—you need treatment. Most engineers have at some point worked in rooms where the client is saying, “You need to turn the bass up (or down)” and you’re like, “No, trust me, it’s really where it’s supposed to be, listen to it in the car.” You don’t want to have that conversation in a professional environment. You want what the clients hear in your control room to be accurate.

With FuzzMeasure I’m able to say, “I took these measurements, here are the problems with the room and here are the measures you have to take if you want to solve them.” You have empirical data that the client can actually see.

Which graphs do you tend to show a client?

Usually I rely on the Frequency Response and the Waterfall plot.

The Frequency Response is good because you can overlap the results. I’ll take measurements throughout the room. Being able to overlap them allows you to quickly and easily compare peaks and nulls from different locations, and aids in determining what is causing the problems and what type of treatment should go on which surfaces.

The Waterfall plot is probably the most useful for me as it illustrates both frequency response and reverberation time. It generally has the most visual impact with a client, even though it’s also sometimes the most difficult for some clients to understand. On occasion when I’m explaining results and start to notice the persons eyes glazing over I have to break it down like: “This line up here should look much closer to flat and you should only see red or orange for a room this size, so this blue stuff down here is really bad.”

What do you find surprising in the graphs?

I’m not often surprised by the measurement results. Usually I can walk in, make some noise or listen to some playback, and have a pretty good idea of what’s going on. You become accustomed to what modal ringing at a certain frequency sounds like, and certain peaks and nulls are very obvious.

A couple of weeks ago I was hired to evaluate a room that had been recently constructed and treated by another person, but when the client started trying to work the kick drum didn’t exist at mix position. When we looked at the results there were massive—almost 30dB—nulls at 100 and 65Hz. The results were not surprising, but useful in affirming that there were legitimate low frequency problems in the room that were not being addressed by the existing treatment materials.

When you get into the sub-hundred Hertz zone, there are different measures you have to take to resolve those issues. In this case, FuzzMeasure illustrated to the client that the previous acoustic treatment materials that had been installed were not adequate to deal with low frequency problems and that different materials and techniques needed to be used to address them.

Do you design your own treatments? 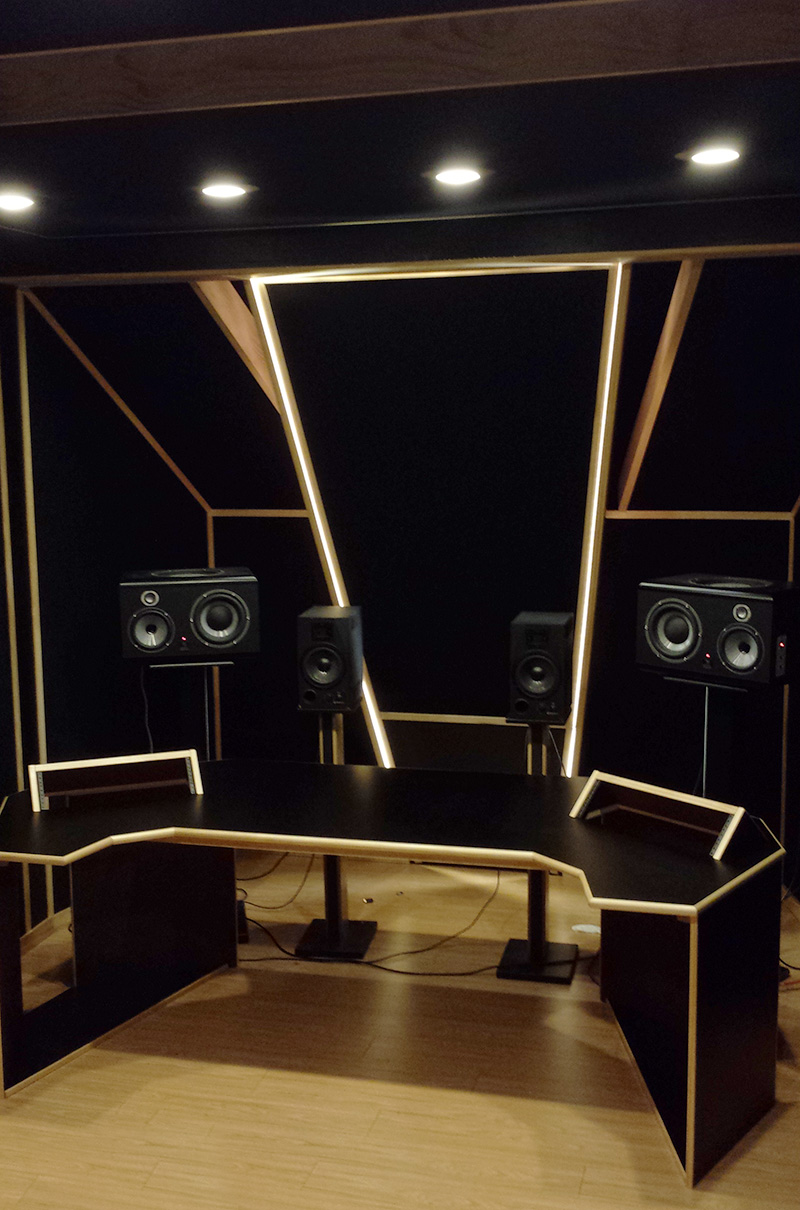 Yes, I design and build both modular panel based acoustic treatment and incorporate treatments into permanent construction—the latter being the type of work I prefer. Some people don’t care. They are cool with a bunch of 2'x4' burlap or polyester covered industrial insulation panels hanging everywhere. There are dozens of guys already making those products; that’s not what I do.

I do use a variety of materials and techniques that are similar to those found in a number of other commercial products and acoustic treatment methods both new and old, however I prefer to implement these materials and techniques in more creative and aesthetically interesting ways. I prefer to work with clients who desire and appreciate a more unique and exotic studio space, whether I’m making Gus Seyffert’s studio look like a 1920’s Victorian living room, making Diplo’s studio look like a Tron inspired space ship, or anything in between…that’s not a fabric wrapped 2’x4’ piece of insulation.

How did you get into this?

I got into it accidentally. I’m an audio engineer by trade and I owned a studio in Louisville, Kentucky from 2001 until I moved to LA in 2011. I had performed some of the build-out and constructed the acoustic treatments for the two different buildings that my studio was located in during that time span, and shortly before I moved I had designed and helped build another home studio for another guy in Louisville.

When I moved here [to LA], I was engineering a couple of records but I didn’t have much planned beyond that. My buddy was a general contractor and he got asked to build a home studio but he didn’t have any experience with that. So he asked me if I would want to help, and I ended up running the entire job…

Then in typical LA fashion, one night in a bar someone asks, “So what do you do” and I’m like, “Well, right now I’m building a recording studio…" The abridged version of the rest of the story is that this person referred me to a friend of theirs, whose studio I also ended up designing and building. Then things just snowballed purely from word of mouth, and the next thing I know I’m getting calls from Atlantic Records and Vice and making significantly more money in studio construction than I ever did or could producing punk and hardcore records.

You mentioned you do treatments and sound proofing?

I do everything from entire ground-up design/builds to small treatment installations. I recently got my G.C. (General Contracting) license. Noise reduction construction for any application—music related or otherwise—is one of the things that I specialize in.

Most construction is not done with isolation in mind. There are a lot of standard construction practices and tolerances that are perfectly acceptable for general residential and commercial buildings, but are entirely unsuitable for studios or any other facility where extreme sound isolation is desired or required. In my experience, people who don’t specialize and have extensive experience in soundproofing construction aren’t going to do a very good job at it.

I routinely see some pretty ridiculous things in studios where there are inadequate sound isolation issues that range from bizarre crackpot methods and materials—where its clear that the contractor didn’t even google “soundproofing”—to other instances where the proper materials are used, but in ways that severely impair their effectiveness. For instance, using the exceptionally expensive QuietRock and having it chock full of recessed lighting, outlet, switch, mic panel and HVAC holes. In general if you ever hear the words Soundboard or Homasote come out of someone’s mouth then don’t hire that person.

Similar to Acoustic Treatment, there are a variety of materials and methods that do work. The specific type and degree of soundproofing construction I recommend or perform for each project will vary depending on expectations, budget and the conditions or limitations of an existing structure.

Does FuzzMeasure help in a soundproofing test environment?

Yes, it could definitely be used for this in the same fashion as materials and wall assemblies are tested for STC ratings (though STC ratings are not especially helpful in and of themselves since they basically represent an average of transmission loss and only extend down to 125Hz.) Outside of a lab, the more practical use would be to illustrate the effect of soundproofing construction by taking measurements from outside of the room before and after they have been implemented.

What kind of range of budget do you typically deal with?

It varies dramatically. A “studio” could range anywhere from less than $1,000 to more than $1,000,000 depending on the needs, desires, and budget of the client, and the conditions of the space where the studio is to be built. Some of my clients are just producing beats and demoing vocals on a laptop, and some of them want to be able to track a loud rock band live and not disturb the neighbors. Some of them need a completely acoustically neutral mix environment but don’t care what it looks like, and some clients only do writing sessions with A-list artists so they care a lot more about how it looks than how it sounds. Some of them care about all of the above…

What pushback do you most get from clients?

Cost, and loss of physical space are the most common points of contention. Many musicians, engineers and producers have spent many years working in recording studios but have never actually built one. So they often have expectations of what the end product should be in regards to isolation and acoustics, yet no real concept of what it actually takes to make that happen. With both soundproofing and acoustic treatment there are a finite amount of materials and techniques that can be used and in many instances the least expensive effective options for either are the ones that take up the most physical space.

Would you still use FuzzMeasure if your client just said, “Do whatever you need to do!”?

Of course, depending on the project. Certain rooms are going to be more difficult than others to assess. Also, in some instances it’s valuable to test at multiple stages of construction to help determine the effects of different materials, techniques and their placements.